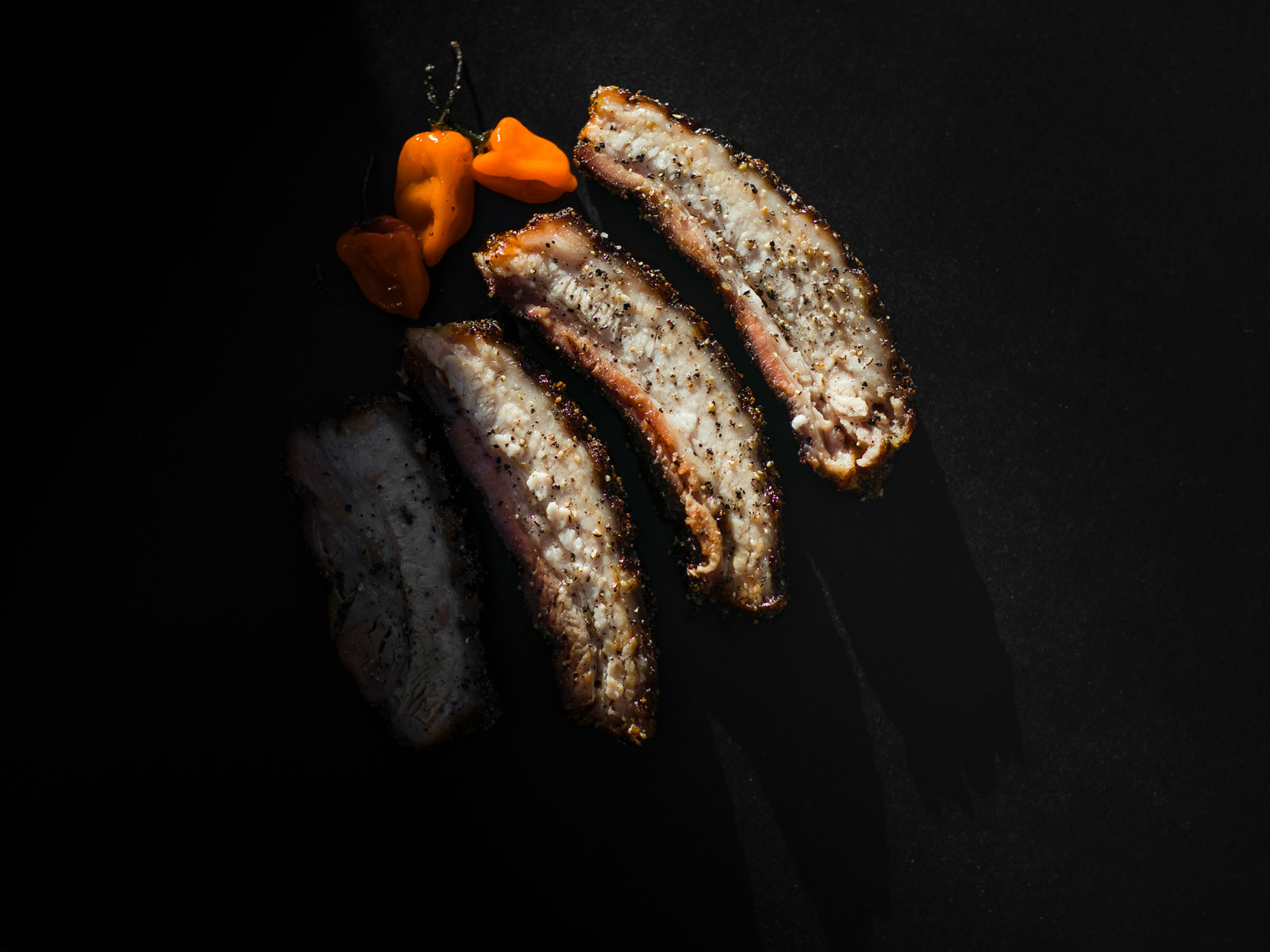 🔗 It took less than a year for Twin Cities chef Jon Wipfli to rewrite for script for ribs, pork belly, and Texas-style tacos.

Like many people with a pellet smoker in their backyard and dreams of opening a rib joint someday, Ben Oberg and Mike Broviak are really critical when it comes to barbecue. They never tire of trying it though, so the Minnesotans are spending a chilly March afternoon searching for the good stuff in Minneapolis. Stop one—a 73-year-old barbecue joint that will remain nameless—was already a wash, apparently.

“I’ve never seen thinner ribs in my life. It was bizarre—like gnawing on a bone,” says Oberg, as we strike up a conversation outside Able Seedhouse + Brewery. “Luckily we only got a half order.”

Contrast that with the “exceptional” Korean short ribs Oberg had at Young Joni recently. Chef-owner Ann Kim starts with a far better product, keeps its execution consistent, and rounds out the recipe with a few secret weapons: the ribs are made all-the-more memorable by a kalbi marinade, chimichurri sauce, and charred serrano yogurt. It might not be the most traditional preparation, but we’re talking about a recent James Beard Award nominee for Best Chef: Midwest here, not a restaurant that’s resting on its laurels or relying on customers who don’t know any better.

Coincidentally, one of Kim’s favorite pit masters is also serving exemplary ribs—traditional salt-and-pepper takes on par with anything we’ve had in Texas—in a food truck right behind us. Having already plowed through one of their barbecue plates, Oberg and Broviak say they approve of Animales Barbecue Co.‘s message despite its limited hours (Thursday through Sunday only), tightly edited menu, and tendency to sell out of certain items because everything’s fresh out of the smoker, not taken out of a freezer and tossed in a microwave.

Jon Wipfli wouldn’t have it any other way. Born in Wausau, Wisconsin, and classically trained at New York’s French Culinary Institute, the Animales founder spent his formative years at Cookshop and Marlow & Sons. This was back when Brooklyn dining was starting to become “a thing,” so Wipfli took a lot of lessons away from the latter, from how to run a high-octane kitchen to keeping recipes streamlined and never, ever putting vegetables in stock.

Soon after deciding to leave those lines behind and move back to the Midwest, the Green Bay Packers fan (shhh, don’t tell anyone!) landed a prime sous chef position at The Bachelor Farmer in downtown Minneapolis. A decade of fine dining started to wear on Wipfli after a while, however, so he split two-and-a-half years later and launched his own catering/education/consulting business called The Minnesota Spoon. This led to yet another learning process: a stint as the culinary director of a restaurant chain.

“I remember when we put in our first order for ribs,” explains Wipfli, “and I couldn’t believe it how much it was. You just see food on this different scale.”

One of the role’s biggest lessons was how to set a restaurant up for success. Or as Wipfli puts it, “how to get systems in place so you can walk away.” The difference with Animales is that he’s not going anywhere. Wipfli gets to work every Saturday morning at 7 a.m. to load its custom Southern Pride smoker, grind bucket loads of black pepper, and season the pork belly and ribs he purchased and pre-cut with precision a couple days earlier. The rest of his staff joins Wipfli in Animales’ satellite kitchen two hours later to do any remaining prep work, load up trays, and get their mise en place in order.

“It’s more crucial in a truck,” says Wipfli, “because we get one shot to bring in the product on a busy day. If we don’t get it right in the first run, we’re kind of screwed.”

When we stop by to watch the process in person, chef Eric Hume is busy turning fresh bags of masa into tortillas for the Texas-style chicken birria tacos he’ll soon crank out along with several bowls and sides. Since moving to Minneapolis from Decorah, Iowa, Hume has staged at Bachelor Farmer and worked at such esteemed local eateries as Uptown 43 and Alma. The latter is where he met Arie Peisert, a fine-dining vet who took his own fast-casual turn with Northern Fires. Hume helped get the pizza-driven pop-up off the ground during its farmers market run last year. Once the season wound down, Peisert recommended Hume for Animales’ fall opening. He’s been one of its core station managers ever since.

“Jon’s really patient with me, and he’s a good teacher, too,” says Hume. “Nobody’s yelling here; if you make a mistake, it’s just ‘from here on out, we’re going to do it this way.'”

When we ask him about Animales’ most enlightening moments thus far, Hume continues, “Just a bunch about barbecue, man, like how to use all of your senses to know when something’s done instead of a temperature gauge. I mean, he’s a wizard; he can just look at a rib and know exactly where it’s at just by bending it.”

Another key recruit straight from the starting gate was Louis Tufte, a former co-worker from The Bachelor Farmer—Wipfli actually hired him—who spent three-and-a-half years as its pastry sous chef. Not the kind of position you just up and leave, although Tufte couldn’t be happier about his time at Animales. Whether he’s working the window like a true front-of-house leader or making s’mores from scratch—including homemade marshmallows and salted fudge—every day is different and part of a collective effort to elevate their menu even further.

“Jon was one of my first real mentors,” says Tufte. “When he started the Minnesota Spoon, I did events and dinners with him whenever I could. The thing about Jon is he never half asses anything. So when he asked if I wanted to join him in bringing real barbecue to Minneapolis, I said yes. I knew I was going to learn and that it would be the best. Because that’s Jon’s starting point.”

This pursuit of perfection is why you won’t find brisket on Animales’ menu right now. It’s not that Wipfli isn’t capable of cooking it (“dude, it’s so good,” he says); it’s just that his process requires getting to work at 4 a.m. and not leaving until 10 at night. He endured that grind for a few months during Animales’ rollout, but the looming deadlines of his second cookbook (next month’s Fish: Recipes and Techniques For Freshwater Fish) and back-to-back 18-hour days began to take a toll.

“I started to have weird heart things happen,” he says, “and my girlfriend started to not like me as much, so once it got real cold and I got real crabby, we stopped.”

Most customers don’t mind because Animales has become known for laborious specials instead, including jerk chicken drumsticks that are heavy on the habaneros, generous slabs of smoked prime rib, and beef cheeks that beg for a barbacoa taco of their own. All of this makes sense when you consider Wipfli’s childhood. While no one in his family mastered brisket or pork belly, they spent a lot of time hunting, fishing, and cooking over an open fire.

Meanwhile, Wipfli’s “typical Midwestern diet” was blown wide open by growing up in a town with a significant Hmong population. Unlike the “dudes who went to Burger King during lunch breaks,” he opted for purple sticky rice and hot sauce or stuffed chicken wings, egg rolls, and sausages cut with chilies, ginger, and Thai basil. Taken in tandem—all this open-mindedness, all this flavor—it’s no wonder why Animales’ standards are so high.

“Jon has a fine dining background, but I think his understanding of barbecue comes from a more innate place as an avid outdoorsman,” says Kim, when we ask the acclaimed chef what sets Animales apart within Minneapolis’ increasingly competitive restaurant scene. “Jon also understands that great barbecue is a craft. That hands-on skill is evident once you taste his food; there’s a beautiful simplicity that allows the quality of the meat to shine. No fancy tricks or intricate rubs—just salt and pepper and a keen understanding of how to manipulate time, temperature, and smoke to create some of the best barbecue in Minnesota.”