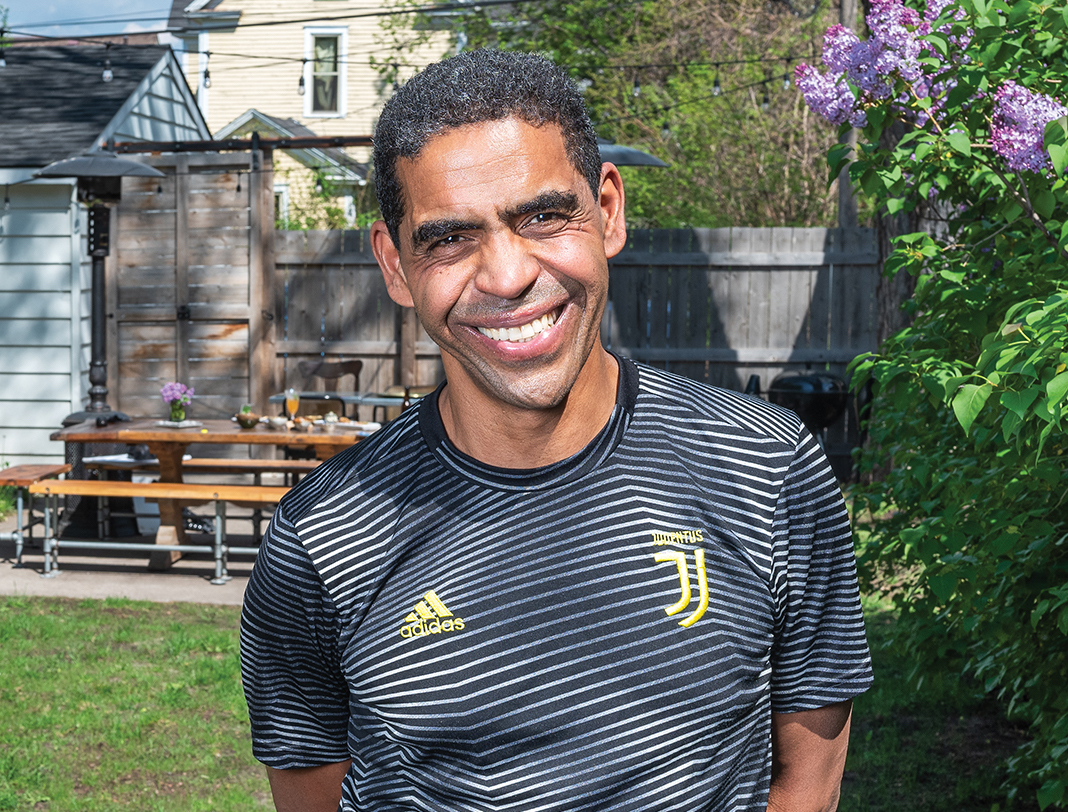 More than 30 years of hospitality experience—mostly as a bartender in Minneapolis (The Bachelor Farmer, Tilia), New York City, and his native Egypt—has led to Mohamed Kotb’s deeply personal dinner spot DervishMazza. A natural extension of his time as an Eatwith (aka the “Airbnb of food”) host, it’s not a restaurant so much as an experience.

In a lot of ways, it’s like Heather Jansz’s cult hit The Curry Diva—an intimate and inspiring look at someone’s culinary life and unbridled creativity—but Kotb has the added benefit of serving guests in his own backyard.

DervishMazza started with takeout/delivery service in early 2020, but added several reservation-only seatings this past spring. Kotb’s five-course menu starts with a milky aperitif of anise-kissed arak and ends with a cool-down cup of lemon sorbet. The meal itself unfolds like a refined tour of Kotb’s Egyptian roots (his grandparents, mom, aunt, and older sisters all taught him a thing or two) and his own lust-for-life travels throughout Europe and the Mediterranean.

A perfect example is his Silk Road signature—hummus with a beating heart of sundried tomatoes and Thai chilies. Elsewhere, muhammara and turkey thigh koftas are a made-for-each-other marriage of sweet and savory notes; artichoke hearts are brightened by blasts of preserved lemon; and crunchy-yet-creamy falafel collapses into a trio of toasted seeds.

In the following interview, Kotb explains how he went from growing up in Egypt to catering a private dinner for Amy Klobuchar.

When did you come up with the idea for DervishMazza?
I’ve always loved cooking and experimenting with ingredients, but when I became part of Eatwith about four years ago, I decided to really push the boundaries of what I can do and dive into Persian and Syrian cuisine.

As Rumi, the great philosopher and poet would say, “If you don’t plow the earth, nothing will grow.” So you’ve gotta plow it! And plowing is hard. You’re disturbing everything. But once you put some seeds in, you start to reap the rewards—the flowering, the sprouting of things.

I really wanted to challenge myself and follow my guts, so I decided to leave Tilia in September 2019 after almost 20 years. Then I got a job at a new place in the North Loop called THR3 JACK—a golf simulator/bar concept. I was running their bar program for about five months and realized, “Man, I don’t belong here. It doesn’t stimulate me. I need to go out on my own.”

So by spring, I decided to give them a month’s notice and really push hard on the Eatwith program and a room—an Airbnb listing—I was renovating and remodeling in my house. Between these three things, I thought I could stay on a tight budget and make enough money to sustain myself. Of course I gave my notice and the last working day as March 30, 2020.

Just in time for COVID!
Exactly. They said, “Mo, you gave us a month’s notice. Why don’t you just make it two weeks?” I said, “Well, if that’s what you would like, sure.” So my last working day was Friday, March 13.

So I finished up there and was going to travel to Havana, Cuba, to do some salsa dancing. I wanted to spend a week there and then start the new endeavor. Of course, I finished work on March 13 and the pandemic hit two days later. Eatwith and Airbnb closed down, and the Cuba trip was cancelled.

When I was doing the Eatwith events, the most popular course was the mazza. It’s such a beautiful way of starting a meal. I started talking to my friends about doing three different mazza with crudite and pita chips. And I reached out to a great friend of mine—a designer named Joe. I said, “I need a business card.” He responded with a website. And then, just like that, people started to support it.

Can you talk about how you’re trying to create the kind of meal you might have back home in Egypt—one that’s much more intimate and inviting than a traditional restaurant, almost like a stranger inviting you over to their house for dinner?
What we’re really trying to capture and offer here is warmth. That’s why I do my best to be at the door, and then as soon as you walk in, you have a welcome drink. You don’t even have to ask for anything. It’s just there, right away.

That’s the sense of hospitality and warmth and welcoming I grew up with. You can dine with a stranger for two or three hours. It’s not a restaurant thing.

When I was growing up, my mom would give a plate of what she cooks to the neighbor. And when they returned the dish back, the dish wouldn’t come back empty. It would be filled with something else the neighbor cooked.

That’s the kind of exchange I have with my neighbor here. Mike is a native Minnesotan, and he happens to be a really good cook. He made one of the best tabouli salads I ever tasted. And when we had a catering [job] last Saturday—15 people, including the senator—I asked him if he could make the tabouli salad. And he said, “Absolutely.”

So he gives us the tabouli salad, and I like to jazz things up, so I added beautiful pomegranate molasses from Lebanon, good Tunisian extra virgin olive oil, some salt, and some pepper. It’s so bright, delicious, and sweet.

That’s what I grew up with—these interactions, these exchanges with neighbors of kindness and compassion and health. It all comes from Egyptian culture. We have a saying, “the Prophet [Mohamed] asked us to take care of the seventh neighbor.” We take care of each other…and we want people to leave with kindness, sweetness, and compassion. 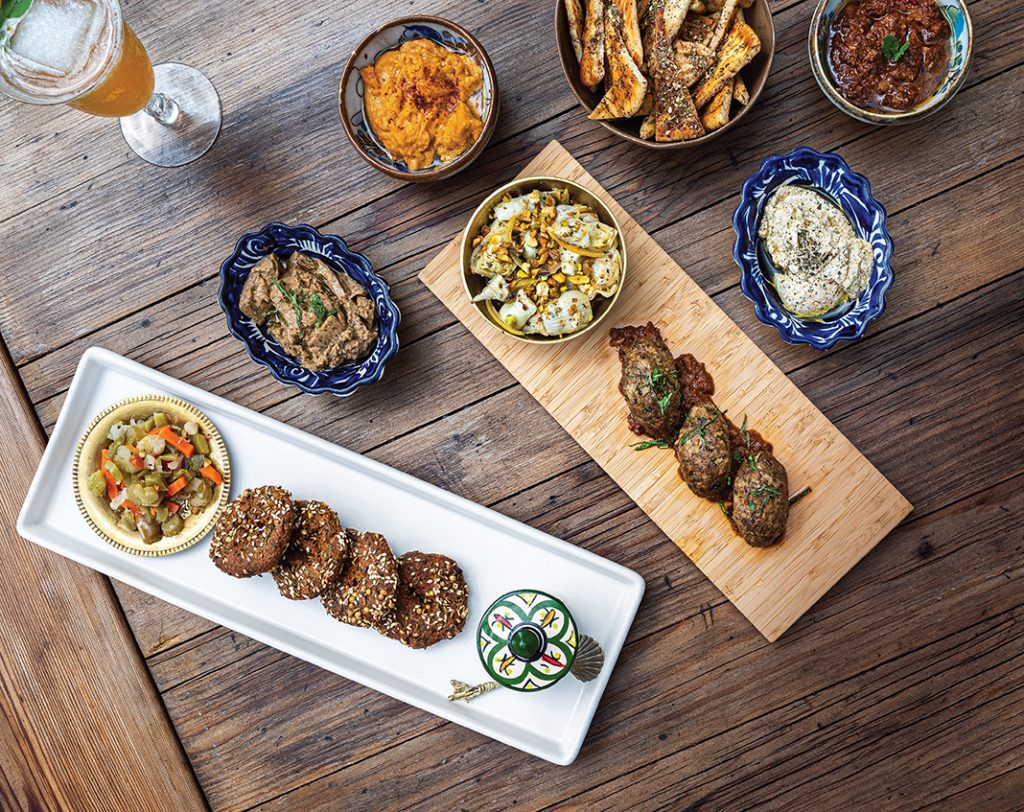 It feels less like we’re your customers and more like we were invited over to your house to hang out for a couple hours.
That’s the whole idea. Even when somebody comes to pick up some food, I often make them a little jar of homemade mixed za’taar as a thank you. And I make sure they get back to their car and wave goodbye to them because, to me, it’s really a relationship. It’s a connection, a community. At the end of the day, it seems to work. I really love it. I’m so grateful. It’s been an amazing journey.

Did you say that you just catered Amy Klobuchar’s birthday before?
Yeah, it was amazing. A friend of hers called me to arrange a casual dinner. I asked, “What’s the occasion?” And she said, “Oh, it’s our senator’s birthday.” I said, “That’s fantastic.” I called to make sure everything went well and they said, “It was really lovely. You could have given us less food though.” The idea is for you to have leftovers. So the next day, you keep thinking about DervishMazza. That’s done on purpose because we want to be generous.

Is one of your biggest inspirations travel?
I think so. Travel exposes you to different viewpoints, cultures, languages, and music. A different air, you know? I don’t think I would be the same Mohamed living in Egypt as I am now.

We have this saying I grew up with: “I don’t want to wear the same dress as my dad. I want to wear a different dress.” It’s not to refuse his dress, but just to take his dress to the tailor and alternate it to my preference—to my size, color, and fitting. To make it funky, urban, modern, and attractive. Travel and being exposed to different people really shaped who I am now, and what I’m trying to develop with DervishMazza.

Can you talk about a few of your favorite dishes?
DervishMazza is very much an experiment. Like I love hummus, but I’m bored with how traditional it can be. So I added sundried tomatoes and Thai chilis. The Thai chili reflects Asia; the sun-dried tomatoes represent Europe; and the chickpeas, tahini, and cumin reflects the Middle East. That’s why we call it Silk Road.

I love traditional baba ganoush, but I was also bored with it. So we created this drink called Saha. It’s an elixir with tamarind, ginger, and lemongrass. It’s a take on ginger beer, but we add tamarind and preserved lemons to introduce salinity and some umami, and make sure it’s not too sugary.

Anyway, I took all the ingredients of that drink and reduced it down to this tamarind sauce. I added it to a traditional baba ganoush recipe and took it to the next level. I think it works beautifully with the roasted eggplant and rich, silky tahini.

All these different elements can work with each other, but you don’t know till you try and fail. And then you fail again. But once you succeed, it’s almost like meeting somebody new, you know? You connect, because you have a lot in common. And it can be a good friend, or a lover, because you have different ingredients that add up to this connection—this level of chemistry. Food is the same thing.

Is there any other example you could give of how a friend, or a place you’ve been, took a dish in a different direction?
One of the neighbors in my neighborhood manages a food shelf. She got some mazza from me and said, “Mohamed, I have these six cases of red bell peppers and four cases of parsnips left over from the food shelf. Do you want them?” l thought, “What am I going to do with that?” But then I told myself, “That’s a great challenge; figure it out.”

So I took them, and I gave half to my friend Fernando who runs the Harriet Brasserie in Linden Hills. I asked my friend who’s a Middle Eastern anthropologist, “I got these cases of red pepper; what do I do with them?” She asked some friends from Syria and Lebanon and then sent me four or five recipes for muhammara. I tried it, and was like, “That’s the best thing I’ve ever tasted.” Now everybody loves muhammara, and I can see why. It’s just so fantastic; the flavors are amazing.

It seems like you approach cooking the same way you approach life—with an open mind and no borders. Like you’re taking your inspiration from Europe, the Mediterranean, and the Middle East. It’s a lot of different cultures colliding, not one specific cuisine.
I grew up in Egypt, but that doesn’t mean the food has to be Egyptian. I worked with some really great chefs in New York as a bartender, and I was exposed to this amazing Nouveau American cuisine, which is American but has a lot of influence from the Mediterranean region and the Middle East.

The Egyptian feel is absolutely there, though, because that’s what I grew up with. Sometimes I call my sisters. You know, they’re older than me, and they’re great cooks. I just listen over the phone and write things down.

There was a great New York Times article about cooking in the Middle East and how they call it nafs, or breath. Some people have a good nafs—a good breath—when they cook, and some people do not.

It’s like when you get two people to mix the dough to bake bread—the same recipe—it will be totally different bread because they express their DNA in it. I think I humbly inherited that [breath] from my family—my grandparents, my mom, my aunt, my sisters. I think it’s moving within my identity, within my DNA, with anything I make.

This interview has been condensed for length and clarity.