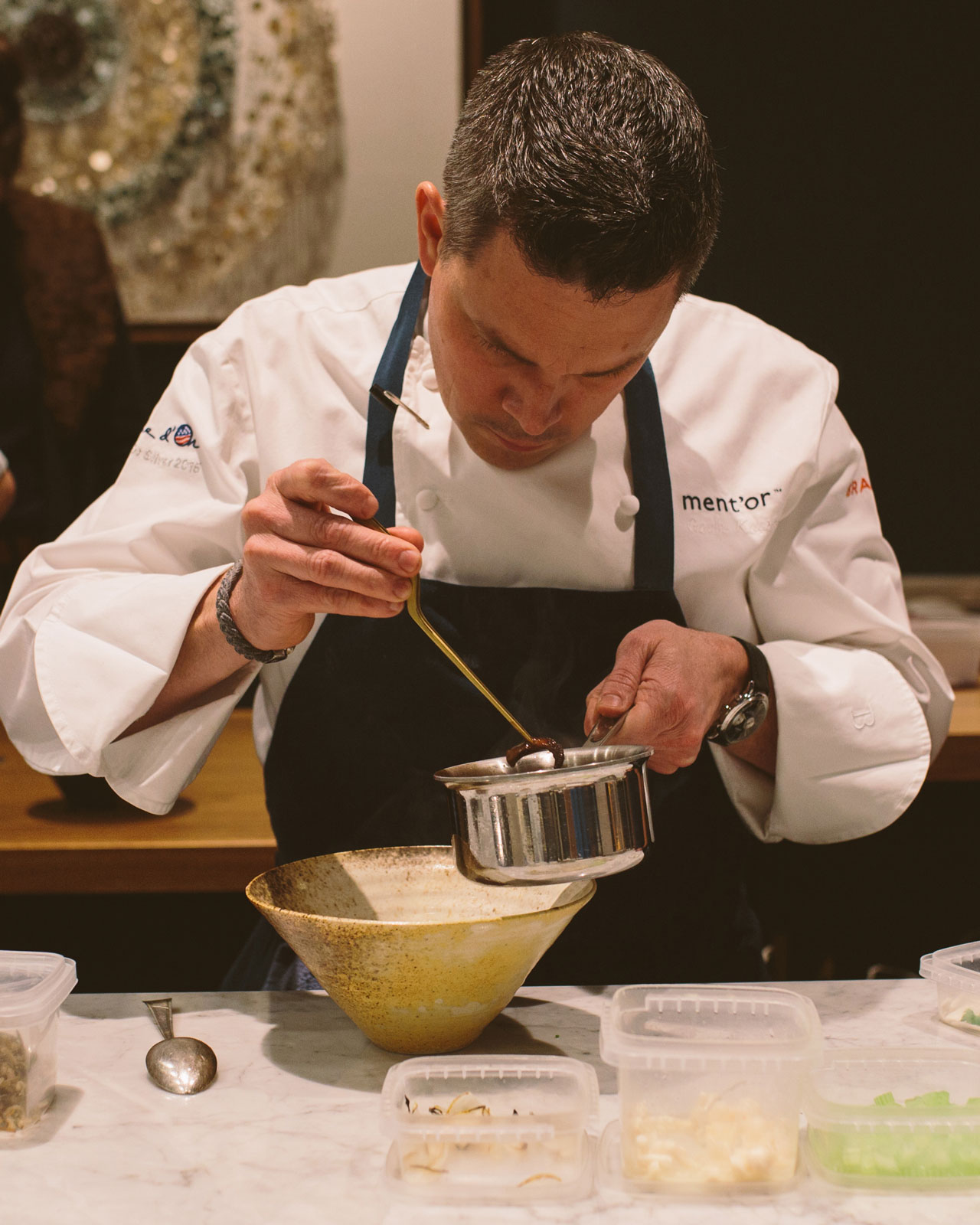 🔗 The award-winning Minneapolis chef reflects on his whirlwind career and hot new restaurant.

Gavin Kaysen had never even heard of Thomas Keller when he scored a last-minute lunch reservation at the French Laundry in 2001. All Kaysen knew was what his roommate—a line cook at the Napa Valley institution—said when a table opened up for the recent NECI graduate and his parents.

“She told me, ‘Show up at 11:30 and make sure you wear a suit,'” explains Kaysen. “I was like, ‘Woah.’ I didn’t grow up amongst food aficionados; in my day, Red Lobster was fine dining. I didn’t even know what a ‘tough reservation’ meant.”

His family had never encountered a tasting menu before either, so they simply watched in awe as the multi-course meal set the stage for Kaysen’s future in fine dining. Once he wrapped a subsequent externship at Domaine Chandon, he followed with stints in London (L’Escargot) and La Conversion, Switzerland (Auberge de Lavaux), as well as a pivotal executive chef position at El Bizcocho in San Diego. The old-school French spot landed Kaysen a F&W Best New Chefnod in 2007—something he parlayed into primetime appearances (The Next Iron Chef), an ill-fated Bocuse d’Or battle (he later became a beloved coach for the U.S. team), and a breakthrough chef de cuisine role at Cafe Boulud that earned him a James Beard Award for the Rising Star Chef of the Year.

When he came to me,” says Daniel Boulud, Kaysen’s longtime boss and mentor, “Gavin was a young chef with a lot of passion for French cuisine. It’s not easy when you arrive in a new kitchen and town; you have to build a real team and earn respect from everyone. Gavin checked all of those boxes and did very well.”

Boulud and Kaysen became so close over the past decade that they visited Paul Bocuse‘s grave with a mutual friend on what would have been the legendary chef’s 93rd birthday. Said friend happened to be Thomas Keller. Turns out he joined Boulud in the seed investment stage of Spoon & Stable, the buzzworthy New American restaurant that brought Kaysen back to Minneapolis in 2014 after a formative run with Boulud’s Dinex Group.

While he was born in L.A. and lived in Chicago until he was six, Kaysen spent his childhood in Bloomington, Minnesota, where he worked at Subway, got poached by a locally owned competitor (the aptly named Pasta Time), and learned comfort food classics alongside his grandmother (everything from chicken and dumplings to Christmas cookies). Spoon & Stable applied Kaysen’s fine-but-still-fun background to these humble beginnings right from the very start, drawing a dynamic line in the sand with knockout dishes like foie gras-flecked pot roast, five different forms of heritage grain pasta, and a tamarind-glazed pork chop served with baby turnips, tatsoi, coconut and toasted rice.

Spoon & Stable has been a leading figure in Minneapolis’ long-overlooked restaurant scene ever since its 2014 opening, enough so to warrant Kaysen’s second James Beard Award last year (Best Chef: Midwest) and a slightly more relaxed sister restaurant in the Boulud-inspired Bellecour. (The suburban bistro/bakery is named after the largest square in Lyon, Boulud’s hometown and one of Kaysen’s favorite destinations in France.)

One thing Spoon & Stable has merely toyed with, but could never fully embrace due to its size (90 seats and 6400 square feet), is radical tasting menus, not unlike the life-changing lunch Kaysen had at the French Laundry nearly two decades ago. The feedback from a year-long chef’s counter was uniformly positive, but Kaysen says it was “too chaotic” to bounce between such a focused service and the a la carte fare of 200 covers.

The restaurant offers two different menus: one that’s two hours (The Barrington) and one that tacks on an extra 30 minutes (The WC Whitney). The number of courses included with each is as fluid as Minnesota’s four seasons (the Twin Cities got about ten inches of snow last April), keeping everyone focused on the experience itself rather than a rigid set of expectations.

“I don’t want to give away the plot of the movie,” Kaysen says with a smile, when we ask him for a rough lay of the land. “Let the guests come in and check it out.”

As for what kind of food he’s focusing on this time around, Kaysen is quick to add, “A lot of people try to box chefs and restaurants into what type of food they serve. ‘Is it French? Is it Japanese?’ We don’t really look at it that way, because technique-wise, there’s a million different ways to incorporate a certain ingredient. For example, if we cook rice, it can be Japanese, Indian, or Moroccan just based off spices and what we put into it.”

Ritter—a Minnesota native who spent more than a decade learning from such Michelin standards as Andre Chiang, Anthony Martin, and Joël Robuchon—says he was happy to stick to a “globally influenced and locally sourced” template with Demi, especially since Kaysen encouraged him to stock a larder brimming with unconventional ingredients like burdock root, prickly ash, and linden flowers, many of which were harvested, dried, and/or preserved from Ritter’s family farm near St. Cloud to avoid panicked calls to a local producer in the dead of winter.

To hammer his point home, Ritter pulls a jar of sumac off Demi’s pantry shelves. Unlike the diminishing returns that collect dust at some grocery stores, the potent seeds are foraged at the peak of their sour powers. This makes them the perfect top note for a light bite of venison tartare with sweet potato chips, fried rosemary, and lingonberries—a nod back to the North’s rich history of hunting wild game, and one of many steps toward creating the kind of revelatory meal Ritter first experienced at Benu in San Francisco.

“Its ups and downs were like an orchestra,” he says. “Some courses would smack you in the face, and others were a little more delicate.”

When we ask Ritter what Demi’s first sucker punch was, he points out a poignant braised octopus, seared a la plancha and served with lardons, red currants, mushrooms, a heritage wheat bun, and a thickened sauce of pig’s blood and morita chilies. “Some people are afraid of the blood at first,” he explains, “but then the plate comes back and it’s empty.”

Kaysen wouldn’t have it any other way; after all, its earthy flavor profile was inspired by a wild hare dish he’s ordered at Chef Bocuse’s influential Lyon restaurant countless times. “The last time I had it, he was alive. And I ate it with him, in his restaurant, so it’s a really impactful dish. We want our food to have stories like that. The goal is to put a lot of thought and care into everything.”

Moua—a veteran of Spoon & Stable and Bellecour who’s been with Kaysen since the very beginning—tapped her family tree for several culinary surprises as well, like a scratch-made soy milk pudding (featuring beans from her parents’ Wisconsin farm), coconut sorbet, and birch syrup that’s been infused with vanilla and mint. Moua also convinced her mom to reveal a closely guarded sesame balls recipe for the first time.

“It took me the longest time to come up with a menu,” says Moua, “because we’re trying to create more than just dessert. Demi is meant to be a chef’s dream—an experience.”

That goal hits you soon after you step through Demi’s low-key doors, whether it’s through the warm interior design of the local Shea agency and Gavin’s wife, Linda, the idiosyncratic music selections of Juliana Kelly (lots of local artists, rounded out by The Cure, Spoon, and Nina Simone), or the abstract-yet-accessible artwork of Laurie Borggreve, which tells the story of Second Street’s former tenant, an old coffee factory.

“During the renovation,” explains Borggreve, “several 120-year-old ledgers were discovered. They were in rough shape, yet they contained beautiful handwritten notes, invoices, and illustrations that I ended up using for the creation of the central artwork. It was a true privilege to give these old materials a new life; I think they are a great connection to the artistry and beauty of the Demi experience.”

“It’s inspired by the wines Tristan picked,” explains Jones, “and a really unique thing in Minneapolis. The menu will change all the time, but one thing that we’re offering right now is a tarragon and lemongrass tonic which cuts the richness of the black cod that’s currently on the menu. I’m really proud of it.”

If there’s one thing that’s missing from Demi, it’s the porcelain ware and white tablecloths that younger diners now consider dated and stuffy—a forgotten relic of one’s fine-dining roots. Kaysen will happily explain why he supports the evocative pottery of Ashley Linn and Robert Gordon, but he’s not about to forget where he came from, either.

“It’s not that I want to avoid white tablecloths or the beauty and art of what that dining is,” explains Kaysen, “because whether people think it’s cool or not, to me, it’s history. We stand on the shoulders of those in front of us—people like Daniel [Boulud] and Thomas Keller….To me, white tablecloths are still so cool. I miss them, actually; I love that type of food, cooking, and service.

He continues, “At the end of the day, Demi is a comfortable space, which is really important for a restaurant. Cheers had it right when they said ‘sometimes you want to go where everybody knows your name’. If you feel a connection to a place, you’re gonna go back to it.”