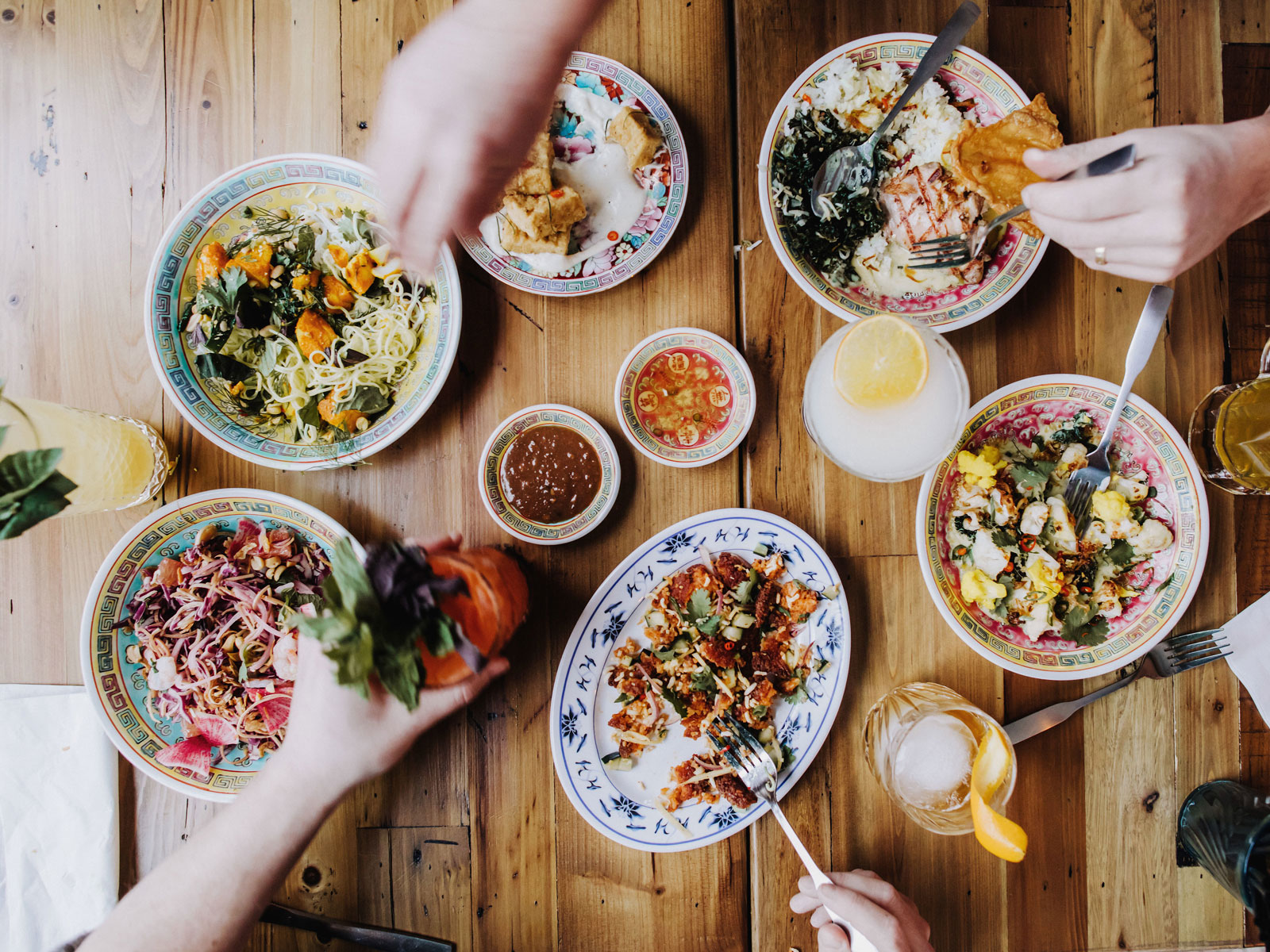 Many locals have a saying about the way people season and serve food in the Twin Cities: More often than not, it’s mocked for being “Minnesota spicy.” Which is a Minnesota nice way of saying the state is a culinary dead zone of bland dishes have been dialed back and defanged.

This isn’t entirely fair or accurate; Minneapolis and Saint Paul both have bold restaurant scenes if you know where to look, including palate-imploding options from Nepal (Himalayan Restaurant), Thailand (On’s Kitchen), China (Szechuan Spice), and the West Indies (Marla’s Caribbean Cuisine). You can also hit up Hai Hai, one of the most talked-about new restaurants of 2018, and take a tour of Southeast Asia that starts in Vietnam (crackly egg rolls, chewy water fern cakes, bright and crunchy banana blossoms) and winds its way through the Philippines (pork ribs adobo), Indonesia (Balinese chicken thigh), Laos (crispy rice salad pelted with sour pork sausage), and Cambodia (a dynamite pork dip that ought to replace chips and dip on someone’s Super Bowl spread).

To eat at Northeast Minneapolis’ busiest restaurant—outside of the pizza joint pioneer Young Joni—is to brave the glorious burn of crushed and chopped bird’s eye chilis and savor the sour, sweet, and salty notes of nuoc cham. It’s also to enjoy one of the best meals in the city and—we’ll say it—America.

Furthering the illusion that you’re in a café several continents away is a sun-bathed, plant-lined interior that reveals little of its sordid history as a smoky, windowless strip club called Deuce Deuce. Not to mention a tropical menu of refined tiki drinks that could headline just about any of the country’s leading cocktail bars (see: such $9 steals as a carbonated Tour Bus Tales combo of gin, lemongrass, Thai basil, pineapple drinking vinegar, cava and ginger, and a Hai Thai of añejo tequila, Thai tea, lime, peanut orgeat, black tea liqueur, and smoky mezcal).

“This place was a massive project,” says chef and co-owner Christina Nguyen, as we sit down in a room so radiant you’d never know it was 10 degrees outside. “None of it looked anything like this. It was basically a dark cave, with layers of crusty shit and interesting graffiti built up over the years.”

“We definitely called in a lot of favors,” adds bar manager and co-owner Birk Grudem, “because we had to do a lot of it ourselves: the demo, sheetrock and tile; sanding the walls down; building the bar top…”

Rather than recruit a pricey design firm to interpret the aesthetics that were already firmly planted in their heads, they also brought seven boxes worth of lamp shades, bird cages, and stools (stools!) back on a plane from Vietnam. Or as Grudem puts it, “Sometimes it’s harder to tell someone the vision that’s in your brain than it is for you to just do it yourself, whether it’s painting a wall or hanging light fixtures.”

Nguyen and Grudem’s scrappy approach to the restaurant business can be traced back to 2011, the year they turned an $800 G&K linens truck into their first business, Hola Arepa. Fueled by cold-brew coffee and the need for startup capital, the now-married couple spent the next three years earning the cult following that’s kept its proper restaurant packed since the spring of 2014.

Building upon the food truck’s core lineup of cornmeal griddle cake sandwiches—served with yuca fries and studded with everything from slow-roasted pork to chimichurri chicken—Hola Arepa’s brick-and-mortar offers a plethora of small plates inspired by Nguyen and Grudem’s trips to Central and South America, including plantain tostadas, beef picadillo molotes, and a cachapa pancake topped with sauteed shiitake mushrooms, goat cheese, huitlacoche, truffle oil, and a soft poached egg. In that way, it’s a lot like Hai Hai: a borderless tribute to the many food and drink traditions they’ve encountered on the road.

“I wouldn’t call it a fusion restaurant,” says Nguyen. “I just think that if your menu spans different countries, you end up with more interesting dishes.”

“The root of the dishes is still very traditional—very humble,” adds Grudem. “It’s all about adapting recipes, instead of mashing them up.”

“Right,” continues Nguyen. “We don’t try to get too wild with things; we just take the parts that we like and try to put our own twist on it.”

Nguyen started figuring her recipes out firsthand about 15 years ago, when she visited her parents’ hometown of Saigon despite their advice to steer clear of the place. “Back then,” explains Nguyen, “they were like, ‘Why do you want to go to Vietnam? ‘That place really sucked the last time we were there.’ And I was like, ‘Of course it did. You guys left under very bad circumstances.'”

While Nguyen’s parents met at the University of Minnesota, they both fled Vietnam in 1975. Her father escaped on a boat, and her mother was forced to leave after her family’s land and home near the airport were confiscated by the Communists. They hadn’t planned on ever returning until last Christmas, when Nguyen and Grudem promised to show them a new side of a country that’s barely recognizable anymore.

Their two-week trip wound down last month, bringing the family’s history full circle. For Nguyen, it was a way to show her parents the people and places that made her fall in love with the transportive power of travel and food—a spirit Hai Hai channels in the darkest days of Minnesota’s long winters.

Since many of their childhood memories have been replaced by high rises and boutique hotels, her parents actually preferred the quaint beachside town of Hội An over the motorbike-clogged streets of Saigon. (Everyone rode actual bikes in the ’70s.) But no amount of noise or air pollution could get in the way of hunting down a “magically good” banh xeo crepe, a pure comfort plate of fried rice cakes with eggs, or everyone’s favorite dinner: a feast of grilled seafood on Saigon’s “Gangster Street.”

“The whole trip was cool and emotional,” says Nguyen. “It was a little overwhelming at first because it was not the same place at all. But they also loved it—loved seeing their old neighborhoods and being around a bunch of people speaking Vietnamese. And nothing can beat when there’s silence at the table because everyone’s concentrating on cracking crab claws and eating. That’s how you know it was a good meal.”