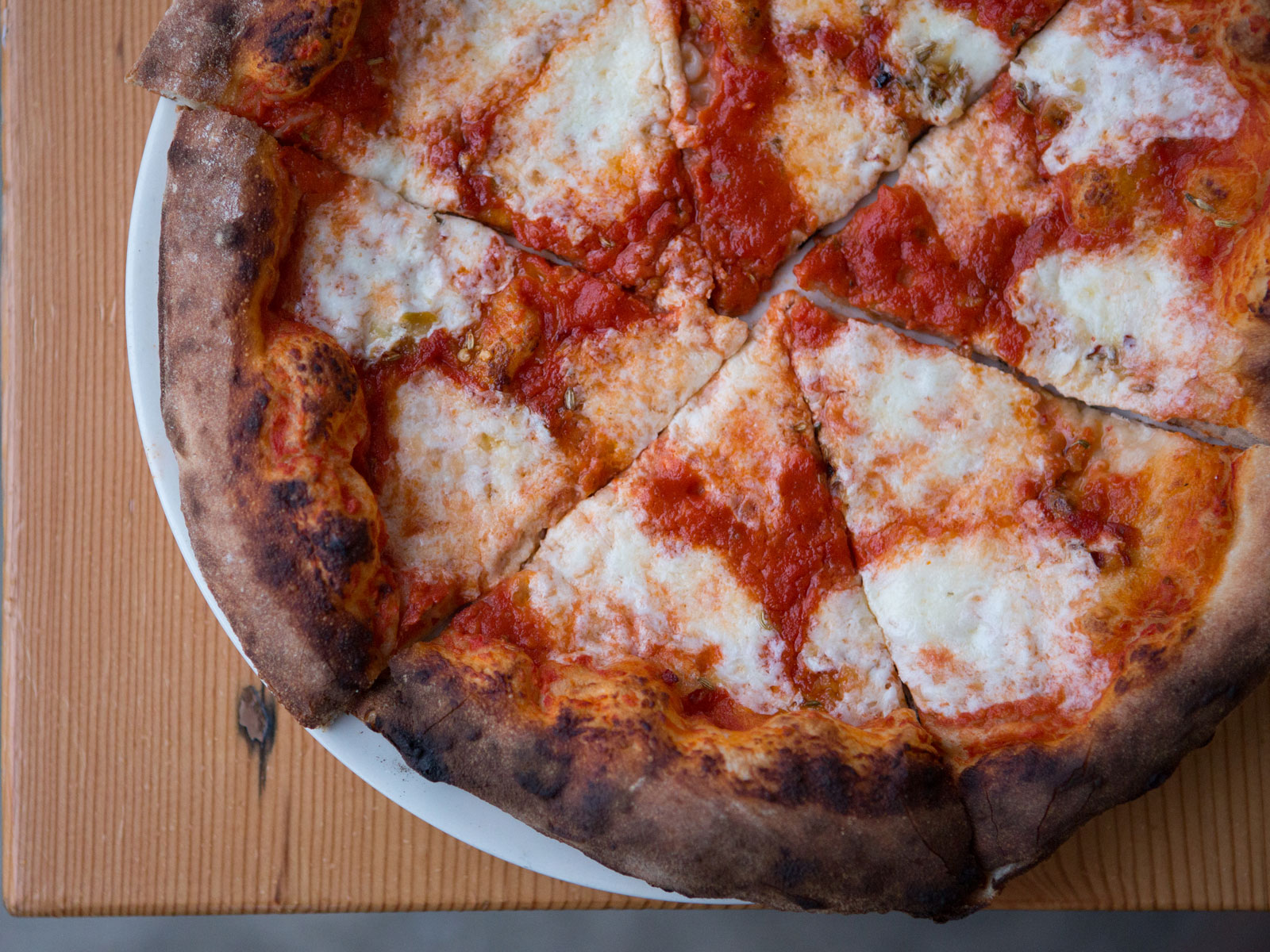 🔗 Portland wasn’t always one of the world’s most compelling pizza cities. Why, just a decade ago, you’d be lucky to find anything memorable outside of two major players: Ken’s Artisan Pizza and Apizza Scholls. The wait times for walk-ins often reflected that tiny gene pool, too, leading some customers to show up at the latter before its doors even opened.

Which is kind of funny, because Apizza Scholls founder Brian Spangler remembers quite a few self-anointed ‘critics’ absolutely hating the pizzaiolo-in-chief’s pleasantly charred pies at first.

“It was really rough in the early years,” explains Spangler. “We had a lot of angry customers telling us they didn’t like our pizza because it was ‘burnt,’ didn’t have enough cheese or toppings, and was too expensive. It was as if the average consumer had been trained to think the correct level of [baking a pizza] is ‘golden brown’.”

It’s hard to blame them. After all, this was 2005—years before New York’s new wave was sparked by such oven whisperers as Roberta’s and Paulie Gee’s, and the rest of the country played catch-up with Phoenix’s Chris Bianco, a true pioneer in today’s prevailing trend of neo-Neapolitan pizza.

Award-winning author/restaurateur Ken Forkish applied this thin-crusted school of thought to a weekly pop-up within his blockbuster bakery the very same year as Apizza Scholls. The maiden voyage did so well it evolved into another critically acclaimed restaurant (the aforementioned Ken’s Artisan Pizza) and a New York-style slice joint (Checkerboard) in PDX’s first ever food hall, Pine Street Market. And while he probably could have stuck with the same proven recipes over the past decade, Forkish really upped his wood-fired game while researching his recent book The Elements of Pizza. Chief among the changes: mozzarella that’s hand-stretched in-house daily, a core menu that changes seasonally (see: a terrific Brooklyn tribute featuring tomato sauce, mozzarella, Fra’Mani capicola, pickled jalapenos, and honey), and dough that’s still in the midst of a fermentation makeover.

All of this makes sense when you consider the increased level of competition Ken’s Artisan Pizza and Apizza Scholls are facing today. Or as Forkish puts it, “Portland’s pizza scene is much more established now than it was in 2005. Escape From New York made a good New York pie, and still does. But I don’t remember too many sit-down pizzerias that were ingredient-focused or aiming for super high quality [food].”

“I didn’t try all the pizzerias in Portland [in the early ’00s],” says Spangler, “but I went to most of the ones people recommended. The dough was an afterthought and toppings seemed to be all people cared about. There were way too many of them—and poor quality toppings at that.”

He continues, “Today’s scene is nothing like it was 10 years ago. There are a tonmore pizzerias now—options for all kinds of palates, whether it be a pizza’s style or toppings. Portland consumers are on the winning end due to the increased competition, which only leads to better quality across the board. If someone doesn’t like my style, they’ll most likely finding their favorite somewhere else in town. I think that’s awesome.”

One leader of Portland’s new school is Lovely’s Fifty Fifty, the second act of Sarah and Jane Minnick’s fancy-huh restaurant Lovely Hula Hands. (It closed in late 2009 due to creative differences within the kitchen.) While the sisters went a more casual route with Fifty Fifty’s menu and vibe, their strictly from-scratch ice cream and pizza is among the city’s most experimental and the country‘s most exciting.

Here’s a short list of Sarah’s favorite specials to give you an idea of what we mean: fenugreek greens with potatoes, pancetta, and stinky, soft cheese; fermented carrots and spicy chilies with quinoa greens and shishito peppers; asparagus with sculpit, new potatoes, fresh sheep cheese, apple blossoms and mint yogurt; porcini mushrooms with English cheddar, sour corn, and chrysanthemum greens/flowers; and black trumpet mushrooms with kohlrabi chunks, pecorino tartufo, and wild watercress. If you had to get a dictionary out to understand all of that, don’t fret; so did we.

“Lovely’s definitely reflects my own love of farm produce first and foremost,” explains Sarah. “There’s a lot of really crap pizza in America because people are attracted to the low food cost and have low standards for ingredients. Portland sets the bar super high because we have accessible purveyors selling high-quality ingredients across the board, and a great community of people willing to pay a little more to support higher wages for staff, small farms, cheese makers, etc.

She continues, “Oregon also has a long growing season and is a huge hotbed for seed breeders and farmers. Our market is the best I’ve ever seen anywhere, hands down, including Europe. Consumers and chefs want to give more on every level.”

That’s certainly true, but what if you don’t want an off-the-rails flavor train blanketed with blonde morel mushrooms, garlicky ramps, salty Fiore Sardo cheese, and “heaps of dressed mustard flowers”? That’s where slice-centric spots like Baby Doll Pizza step in. While it’s run by a classically trained chef (Travis Miranda), there’s a reason why it’s named after his grandfather’s old Tribeca lounge. And it’s not because Portland has about as many craft breweries per capita as it does strip clubs.

“There were only a few truly good pizza shops in Portland six years ago,” explains Miranda, “and even fewer featuring pizza by the slice. I wanted to make a great NYC-style pizza—one I was familiar with, but even better than the basic slices you find on every corner.”

To achieve that lofty goal, he embraced Portland’s all-artisanal-everything approach to ingredients, along with an extended fermentation technique (“poolish” in baker’s speak) for making dough. And while others have followed a similar formula in the nearly six years since then—including former Baby Doll employee Scottie Rivera, of the up-and-coming Scottie’s Pizza Parlor— Miranda maintains a more-the-merrier attitude.

“Many more slice shops have opened over the last few years,” he says. “The cool thing is that all of them have their own twist, like wheat flour that’s mixed in, sourdough starters, or pizza that’s entirely plant-based. I believe everyone should have access to a proper slice at a great price, whenever they want it, and it should be enjoyed in a casual, unpretentious atmosphere. It’s been great to see many neighborhoods grow and get their own slice shop.”

Rivera, whose pizza is a hybrid of New York and Neopolitan styless, agrees. “The great thing about Portland’s pizza scene,” he says, “is that every place has its own style, just like every eater has their own tastes, so no one’s really stepping on anyone else’s toes and we can all just celebrate pizza and enjoy what we’re doing without having a competitive vibe. It makes for a really diverse market with plenty of room for growth, and I still see it growing.”

One of the more noteworthy arrivals on that front came at the tail end of 2015, when fine dining survivor Thomas Habetz (Pó, Lupa, Mesa Grill) unveiled his next logical step after the fast-casual success of Bunk Sandwiches: a nod to his New Haven roots called Pizza Jerk, featuring a raucous, Oasis-inspired attitude and thin 18-inch pies like the It’s Always Sunny In Cully (locally sourced pepperoni, honey and hot peppers, along with pineapple and basil). According to Habetz, he spent a good 45 years working towards this moment. It’s so important to him, in fact, that Bunk recently closed its first location so that a second Pizza Jerk (“a little more intimate… more of a classic slice shop”) could take over its space this spring.

“Pizza seemed so elusive to me as a young chef,” explains Habetz, “even when I was working in such great Italian restaurants. I never dreamed that I could do a place like Pizza Jerk. But hard work, dedication, luck (both good and bad), and obsession pay off in Portland, Oregon.”

When we ask him what sets the city’s pizza scene apart from places like New York, Habetz says, “Everybody consumes pizza the same way; it doesn’t matter where you live. Seriously though, we don’t have the history New York and Connecticut has with pizza, but that allows us a little more freedom. We’ve got a great city of hungry and adventurous eaters.”

That’s what it all comes down to in the end, actually—the ever-expanding culinary education of the American consumer, which has gone from scolding the ‘scorched’ likes of Apizza Scholls to craving it. Very “if you bake it, they will come,” especially in Portland.

“Even though the complaints early on were hard to swallow at times,” says Spangler, “I think it solidified our stance on what we were doing. Maybe some of the success was curiosity; maybe some of it was hype; and maybe some of it was plain dumb luck, but in the end, we started to weed out the detractors and slowly found our core audience and champions.

He continues, “For us, the quality of the product was more important than anything. We kind of looked at each other and said ‘if we can’t make the pizza we want and succeed, then let’s just close up and move on.'”

And with that, Apizza Scholls turned 13 last January.