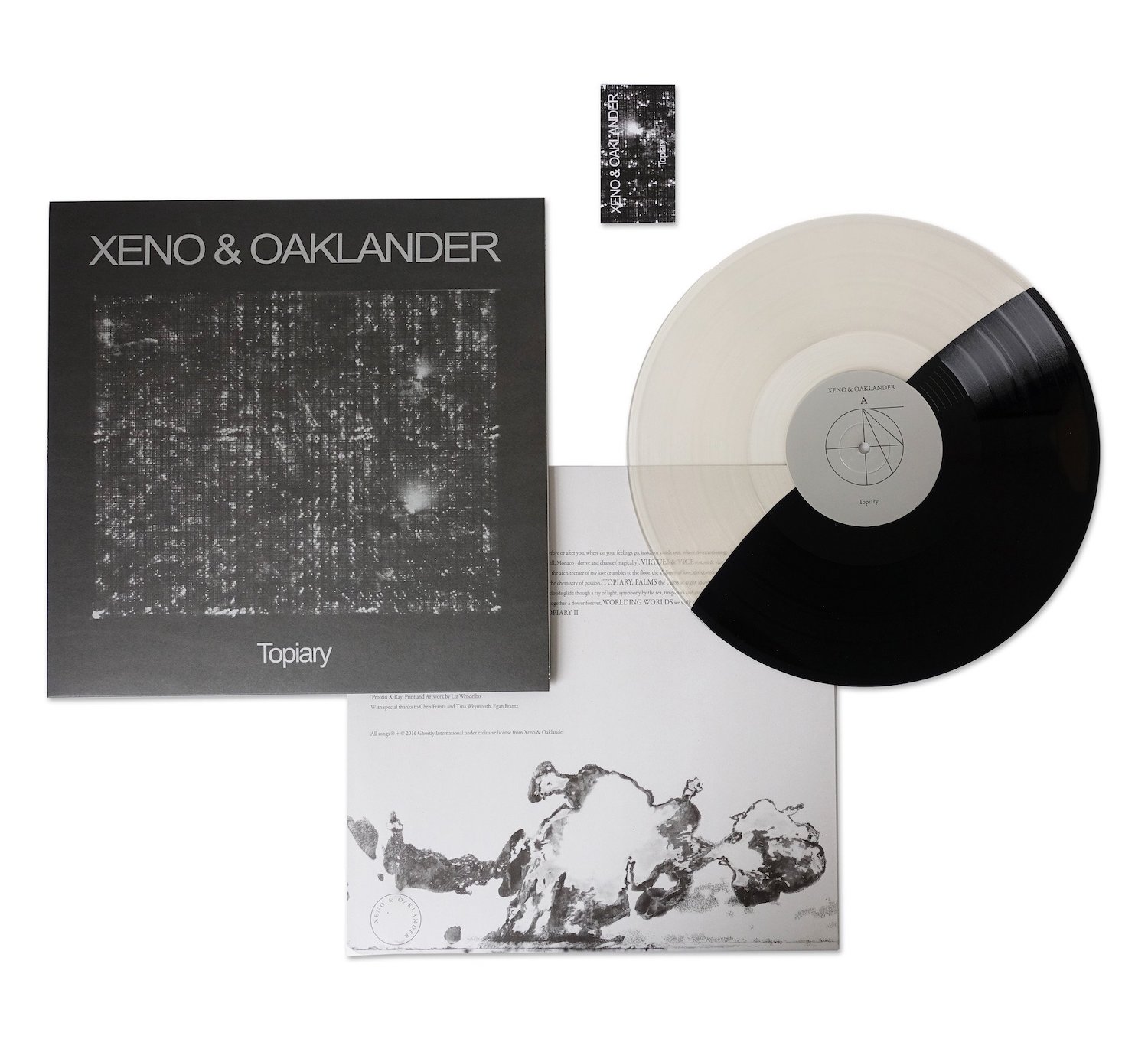 🔗 Maybe the murder of screeching crows that surrounded Connecticut’s Clubhouse Studio—turning all the trees jet black—was a sign that something was up with its latest tenants, Xeno & Oaklander. Well, that and the lunar eclipse that lit the starry night sky while Liz Wendelbo and Sean McBride plowed through another propulsive minimal-synth piece called “Palms.”

“We’ve always referred to our synths as elemental,” says Wendelbo. “Fire is what powers energy, voltage, and electricity. Electromagnetism is electric energy, like lightning in the sky. We control it with potentiometers and buttons; we shape it with filters and envelopes.”

That explains why Xeno & Oaklander’s music has always felt so alive, the result of chemical reactions at its core and chain-linked keys that rattle, hum, and howl. The duo’s fifth album, Topiary, is no different; taking its title from hand-sculpted gardens like the stately grounds of Versailles and the highly ornamental Levins Hall, it’s an enchanting listen, welcoming you into its self-made world with warm synth washes, moody chamber melodies, and Wendelbo’s haunted yé-yé hooks. (Topiary is the first Xeno & Oaklander album McBride—a.k.a. solo artist Martial Canterel—didn’t sing on, although his plush keyboard parts more than make up for it.)

As catchy as they are discomforting, Wendelbo’s lyrics read like poison-tipped poetry, led by lucid passages like the following “Palms” excerpt: The palms at night move in the light The moon is blue Strobes of delight Symphony by the sea Timpanies and mythology The ships at night sail in the dark The clouds glide through a ray of light Symphony by the sea Timpanies and mythology

Much like their seamless live sets—which have won over contemporary art crowds, underground dance clubs, and painlessly cool indie kids—songs bleed into one another, too, becoming moving parts of one streamlined organism, textured and orchestral at every turn. To reinforce the duo’s self-aware sequencing, each side of the vinyl pressing is even bookended by a striking pop song and opulent instrumental. Another reason it’s so fluid is the fact that Xeno & Oaklander broke out of their comfort zone by transplanting their synth-flanked Brooklyn space to a pro setting: Tom Tom Club’s longtime studio, the Clubhouse.

“We began from a kind of Year Zero,” explains McBride, “nothing written, nothing recorded, just a bracketed amount of time in which to compose, arrange, record, and mix the album. For me, this was a highly inspired month—living and breathing music from sun up to moon up.”

Topiary‘s artwork echoes its electromagnetic themes as well; Wendelbo based it on a blown-up X-ray of protein molecules, shot through an electron microscope—a form of crystallography. Or as she puts it, rather cryptically, “What is deep inside of us is a reflection of what is above us. And electricity runs through it all.”